Browse these books published by the Yale Peabody Museum on topics related to its exhibitions, collections, and areas of research. Purchasing information is given with each publication, or see our titles distributed by Yale University Press.

The Yale Peabody Museum no longer carries the books of the Publications of the Pennsylvania–Yale Expedition to Egypt. For information visit the Yale in Egypt website.

Fishes of the Western North Atlantic

Memoirs I & II of the Sears Foundation for Marine Research 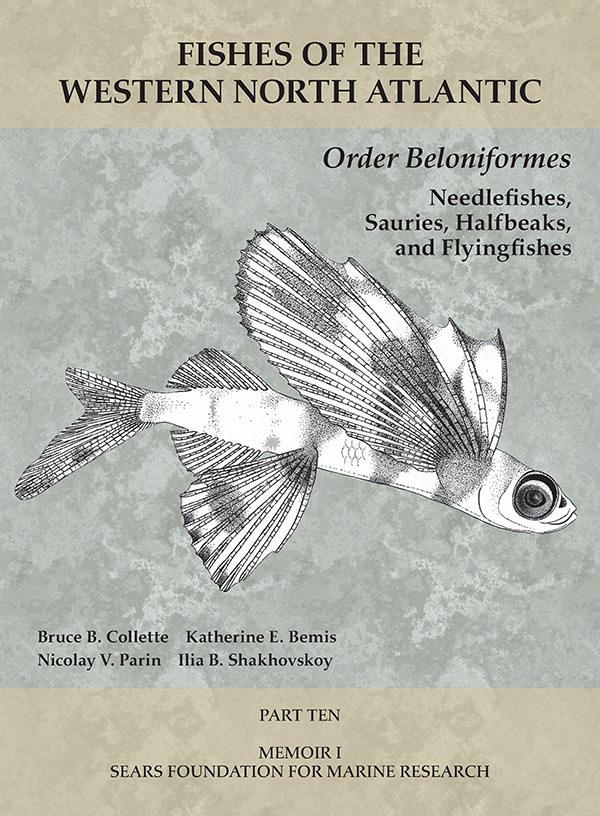 2019 Science Achievement Award, sponsored by the National Museum of Natural History of the Smithsonian Institution

Available for purchase in paperback and as an e-book from Yale University Press.
ISBN 9781933789217

The Fishes of the Western North Atlantic series is published as Memoir I (11 books in 10 parts). There is a single volume in the Memoir II series. All books are available both in softcover and as e-books. Distributed for the Yale Peabody Museum by Yale University Press.

As an aid to researchers and students, the distribution maps for each of the families of the Order Beloniformes —Belonidae (Needlefishes), Scomberesocidae (Sauries), Hemiramphidae (Halfbeaks), and Exocoetidae (Flyingfishes)—from Part 10, Order Beloniformes by Collette, Bemis, Parin, and Shakhovskoy are made available here as a downloadable PDF (18 MB). Maps by William E. Bemis.

The Sea: Ideas and Observations on Progress in the Study of the Seas

The Sea: Ideas and Observations on Progress in the Study of the Seas

The Sea is a comprehensive synthesis of the state of knowledge of ocean science. The latest titles—Volumes 17 & 18—of this long-standing and well-respected oceanographic series were published as supplements to the Journal of Marine Research. Print-on-demand copies are available for direct purchase through Yale Printing and Publishing Services. 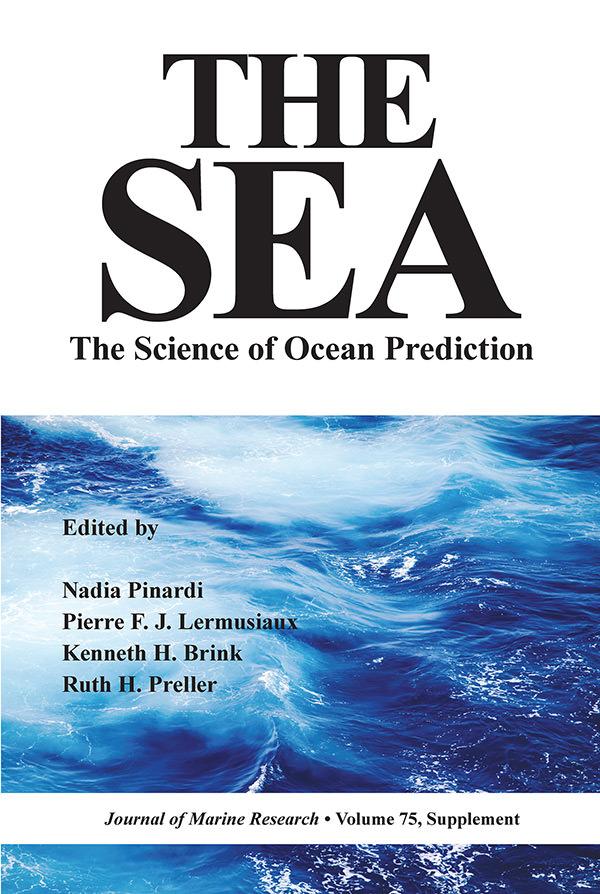 The Sea: The Science of Ocean Prediction

Volume 17 of The Sea aims is concerned with the systematic development of fundamental knowledge about ocean dynamics in the form of testable ocean models and estimation systems that relate to forecasting the ocean’s evolution. Articles cover the scientific understanding and fundamentals that define and allow the ocean prediction endeavor, as well as the implementation of concepts and methods in predictive system components and their applications to varied oceanographic services. 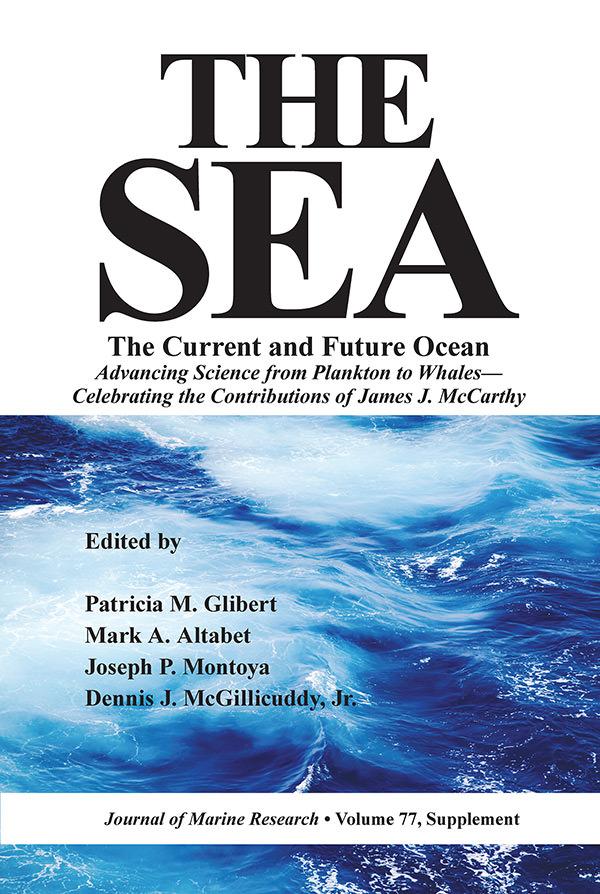 The Sea: The Current and Future Ocean
Advancing Science from Plankton to Whales—Celebrating the Contributions of James J. McCarthy

Volume 18, Supplement to the Journal of Marine Research, Volume 77

Volume 18 of The Sea is a homage to the late James J. McCarthy and the many facets of his career, which have been an important influence on the fields of biological oceanography and global climate change.

Free downloadable digital files of individual articles in these supplements are available from the Yale University Library’s EliScholar digital platform. Previously published titles in this series are available through Harvard University Press. 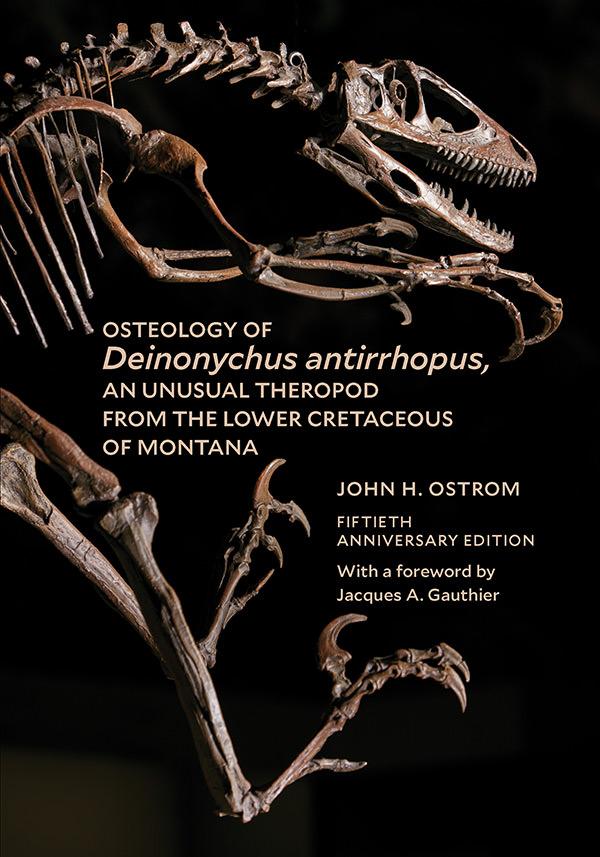 Osteology of Deinonychus antirrhopus, an Unusual Theropod from the Lower Cretaceous of Montana

This reissue of Ostrom’s well-known description of the type specimen of Deinonychus antirrhopus includes his 1969 short paper “A new theropod dinosaur from the Lower Cretaceous of Montana.”

Available for purchase in paperback and e-book. Distributed for the Yale Peabody Museum by Yale University Press.
ISBN 9781933789392

50th Anniversary Edition, Stratigraphy and Paleontology of the Cloverly Formation 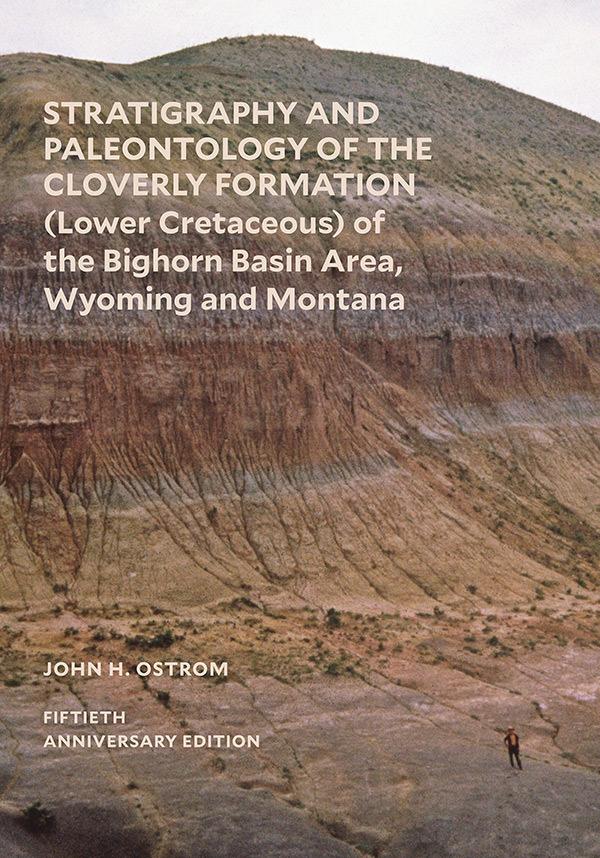 Stratigraphy and Paleontology of the Cloverly Formation (Lower Cretaceous) of the Bighorn Basin Area, Wyoming and Montana

Ostrom’s landmark benchmark research showcasing prehistoric North American landscapes and ecosystems has relevance for researchers and students today who are reinterpreting the age of this iconic Formation with new evidence and data.

Available for purchase in paperback and e-book. Distributed for the Yale Peabody Museum by Yale University Press.
ISBN 9781933789422

Systematics and Morphology of American Mosasaurs 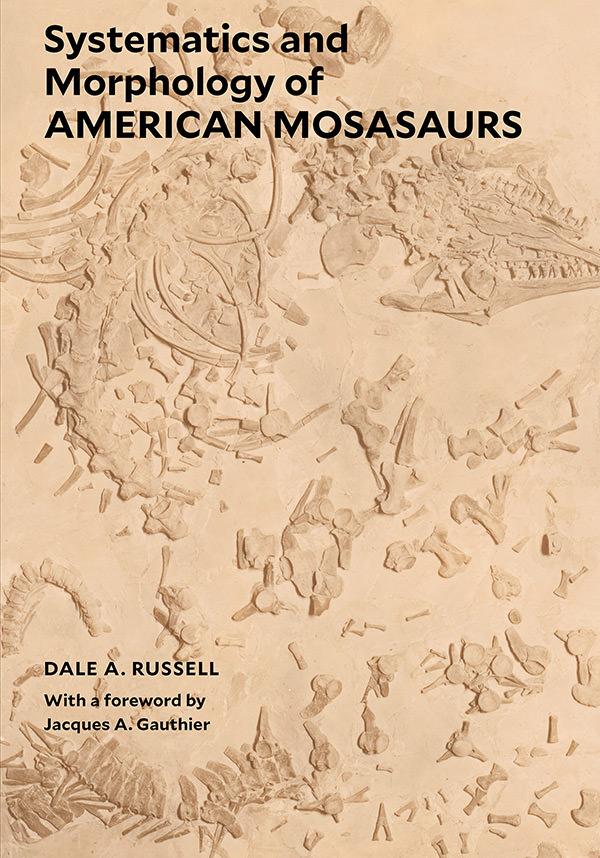 Systematics and Morphology of American Mosasaurs

By Dale A. Russell
Foreword by Jacques A. Gauthier

This reissue of Russell’s work on North American mosasaurs presents the complete, classic text, generously illustrated with more than 100 drawings and photographs.

Available for purchase in paperback and e-book. Distributed for the Yale Peabody Museum by Yale University Press.
ISBN 9781933789446 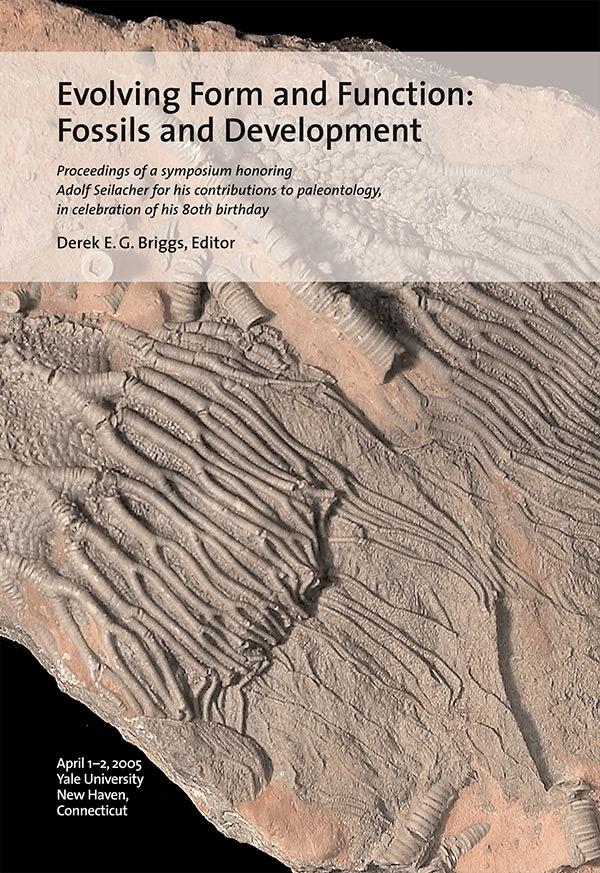 Evolving Form and Function: Fossils and Development
Proceedings of a symposium honoring Adolf Seilacher for his contributions to paleontology, in celebration of his 80th birthday

Available directly from Yale Peabody Museum Publications using our order form. Supplies are limited, so contact us for availability. Please allow 4 to 6 weeks for processing and shipping. 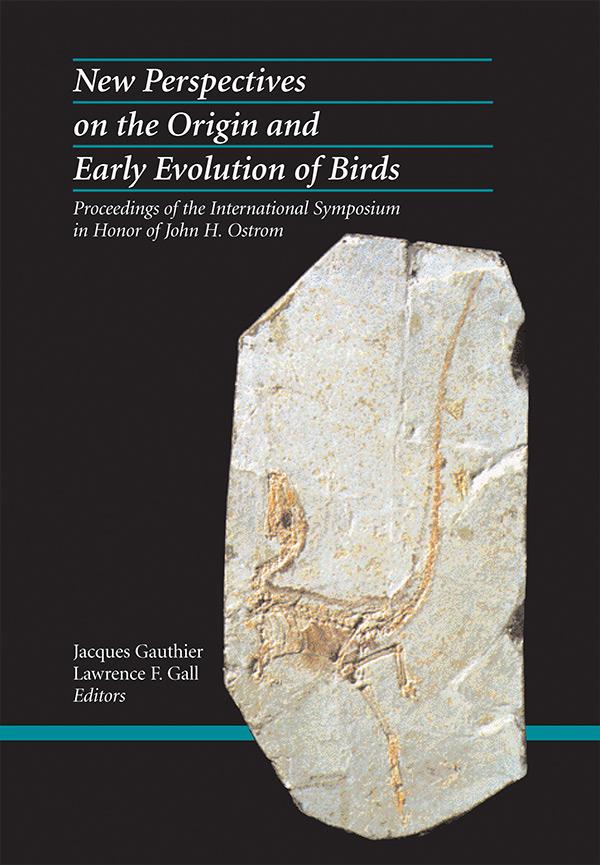 New Perspectives on the Origin and Early Evolution of Birds
Proceedings of the international symposium in honor of John H. Ostrom

The Yale Peabody Museum 1999 exhibition China’s Feathered Dinosaurs showcased the revolutionary fossil specimens of feathered theropods that had recently been discovered in Liaoning Province, People’s Republic of China. The accompanying historic international symposium, co-sponsored with Yale's Department of Geology & Geophysics, placed these discoveries in the larger context of paleontological and evolutionary thought. These 31 articles, including invited papers not presented at the symposium, provide diverse perspectives along with an overview of the then central issues and controversies in vertebrate paleontology that addressed the transition from feathered to flying to crown dinosaurs: taxonomy, cladistics, systematics, evolutionary theory, theropod phylogeny, functional morphology, flight origins and aerodynamics, bird anatomy, vertebrate physiology, molecular and behavioral studies, geochronology and stratigraphy. The symposium honored Yale professor and curator emeritus Ostrom, whose pioneering work made the relationship of birds among theropod dinosaurs a central theme in late 20th century paleontology and inspired a renaissance in dinosaur studies.

Available directly from Yale Peabody Museum Publications using our order form. Supplies are limited, so contact us for availability. Please allow 4 to 6 weeks for processing and shipping.

Electronic versions of back issues of the following archived publications are available as free downloadable files on EliScholar, a digital platform for scholarly publishing provided by Yale University Library.

Select Yale Peabody Museum special publications, Bulletin of the Peabody Museum of Natural History monographs, Postilla short papers, and the Journal of Marine Research are available for purchase. Supplies are limited and are sold “as is.” Access lists of our titles below through EliScholar. Contact us for availability. 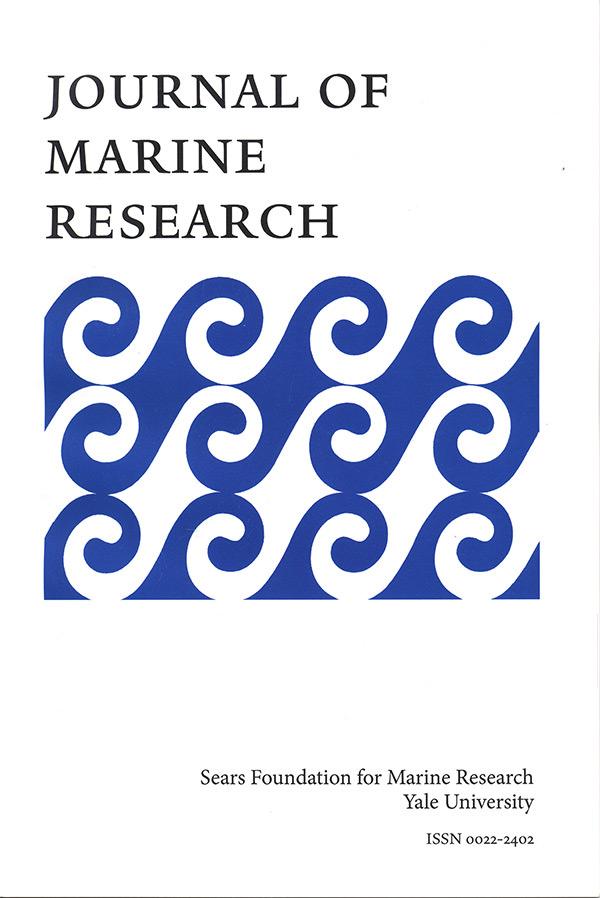 Free downloadable files of articles from Volume 1 through 79 are available from the Yale University Library’s EliScholar digital platform.

EliScholar
Bulletin of the Peabody Museum of Natural History Monographs 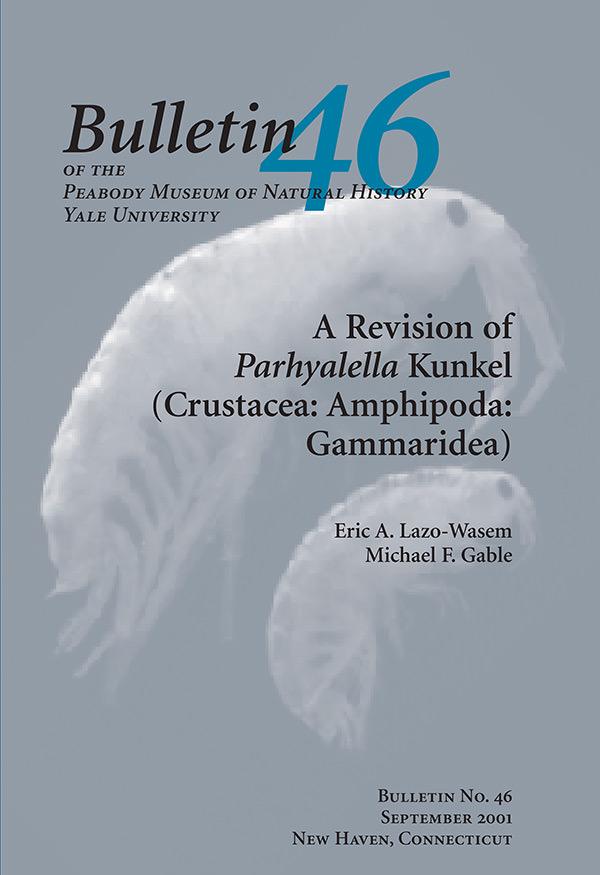 The Bulletin of the Peabody Museum of Natural History (ISSN 0079-032X) was published as a monograph series from 1926 through 1999 (Volumes 1–46). Topics covered original research in the natural science and anthropology disciplines represented by the collections of the Yale Peabody Museum’s curatorial divisions.

The Bulletin became a semi-annual journal in 2006, beginning with Volume 47. Journal articles are available online to subscribers of BioOne Complete. A print subscription is also available. 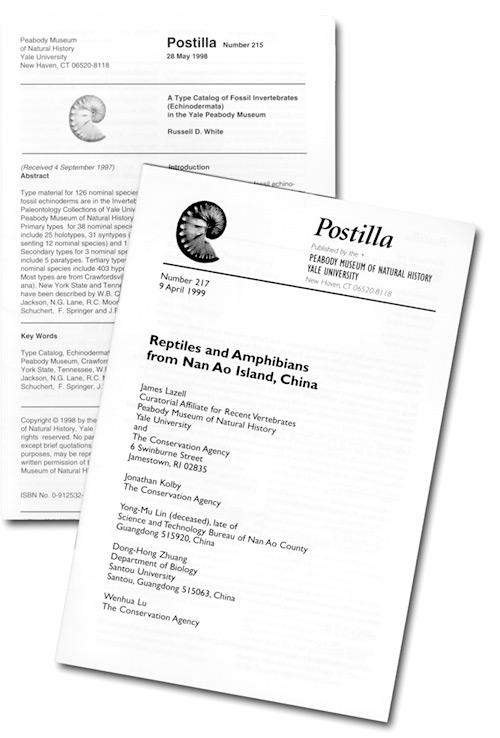 The Postilla series (ISSN 0079-4295) was published from 1950 to 2004 (Numbers 1–232). Postilla short papers reported on original scientific research by Yale Peabody Museum staff and research associates, and their colleagues, in the natural science disciplines represented by the collections of the Yale Peabody Museum’s curatorial divisions. Postilla was incorporated into the Bulletin of the Peabody Museum of Natural History, beginning with Volume 47.

The Bulletin of the Bingham Oceanographic Collection, which published scientific articles and monographs on marine and freshwater organisms and oceanography, ceased independent publication after Volume 19, Article 2, and was merged into the Bulletin of the Peabody Museum of Natural History monograph series after 1967.

In the 1920s New York City businessman and Yale graduate Harry Payne Bingham sponsored 3 private research oceanographic expeditions. In 1927, Bingham established the Bulletin of the Bingham Oceanographic Collection to publish this research on marine and freshwater organisms and oceanography. Bingham donated the entire collection to the Yale Peabody Museum in 1930 and set up the Bingham Oceanographic Foundation to continue and publish this research.

The Bingham Oceanographic Collection focused its early research mostly on the Caribbean. From this material many new fish species were described by Albert E. Parr. Invertebrates were described by M.D. Burkenroad (peneid shrimp) and Grace E. Pickford (flatworms, vampyromorph cephalopods, octopods), and others. The Collection also sponsored expeditions, chronicled in its Bulletin, for basic oceanographic research, some jointly sponsored by the Woods Hole Oceanographic Institution in Falmouth, Massachusetts, using that organization’s research vessel, the R/V Atlantis.

How To Place Your Order

You must use our form to place your order. Orders by phone will not be accepted. All orders must be prepaid. For credit card orders, once we receive your completed order form, we will send a confirmation email with instructions for payment through our secure online payment system. Please allow 4 weeks for processing and shipping.

All purchases are final and nonrefundable. Returns are for defective copies only. Claims for replacement copies must be made on receipt and are subject to availability. Contact us in advance for instructions.