The amphibian and reptile collections in the Yale Peabody Museum’s Division of Vertebrate Zoology are worldwide in scope, with over 23,000 specimens and specimen lots (including larvae) of over 300 amphibian taxa and more than 1,300 reptile taxa. Typically, these are fluid and osteological collections—over 22,000 are wet specimens and more than 2,500 are skeletons. There are 95 type specimens representing 8 taxa in both categories.

The collection dates back to the mid 1800s, with most specimens collected after the 1930s. Expeditions have added to the collection and field collecting in New England and elsewhere in the United States has improved the taxonomic diversity of the North American holdings. The New England collections include specimens from the Maine Amphibian and Reptile Atlas Project and the Connecticut Amphibian Monitoring Project. Collections from outside North America are mostly represented by specimens from Africa and Asia. 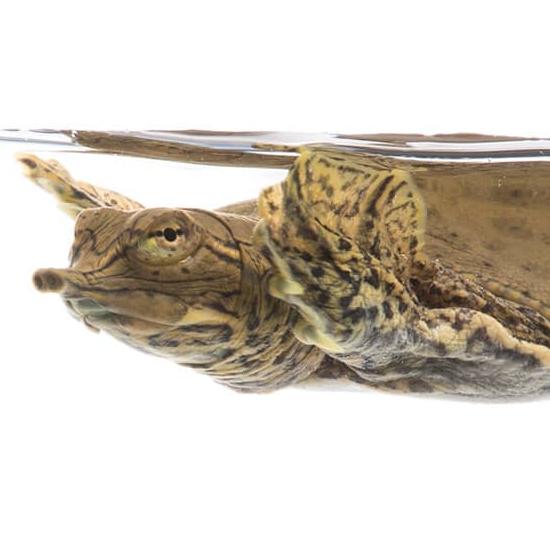 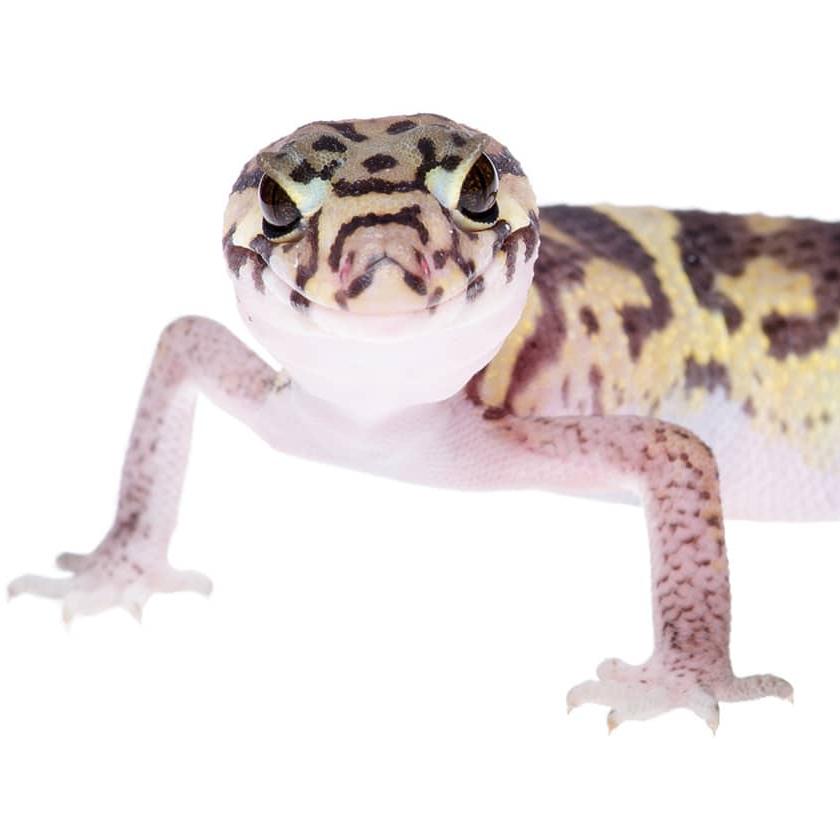 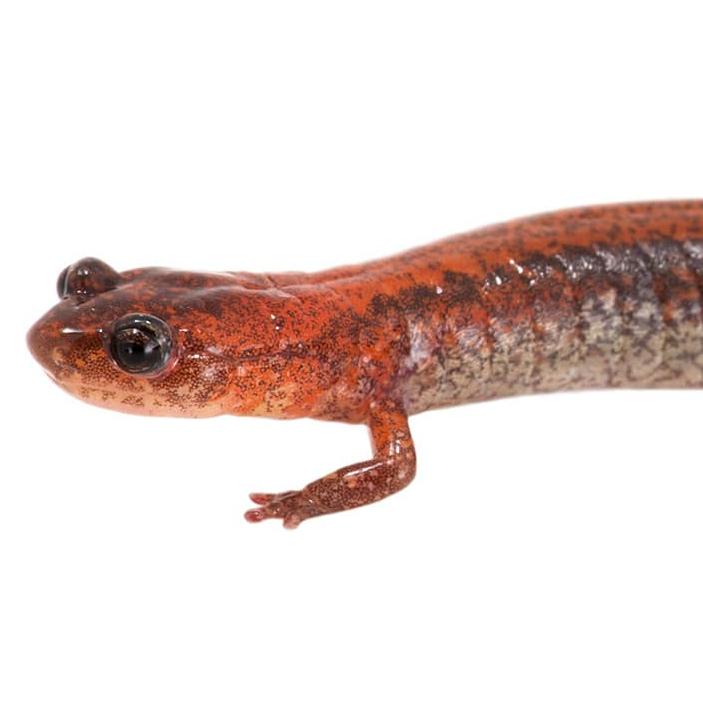 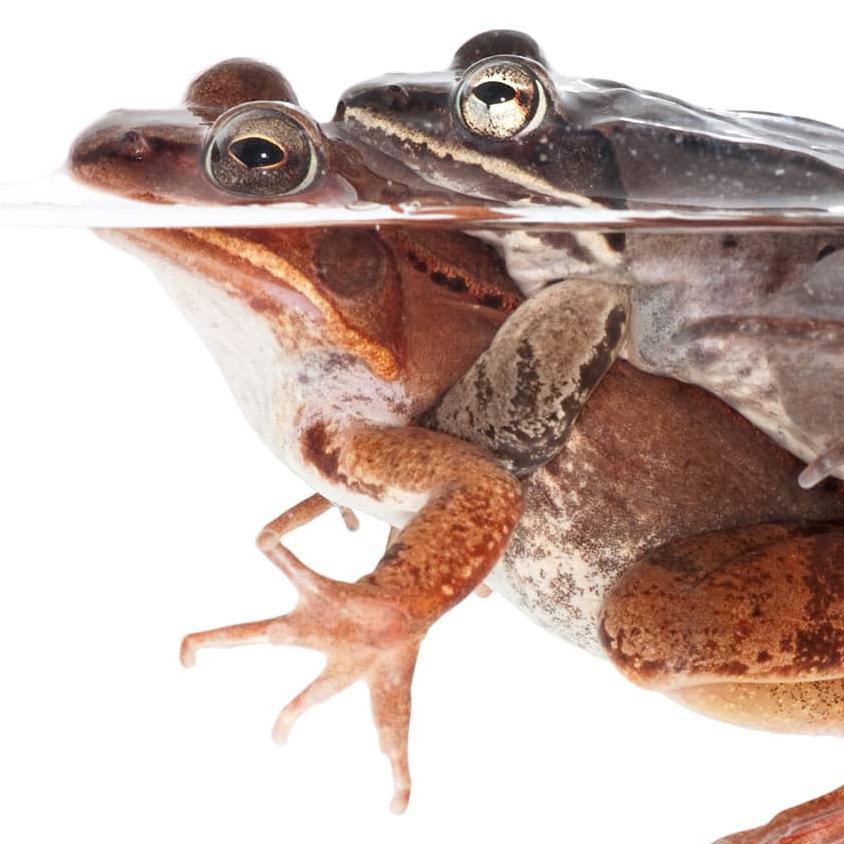 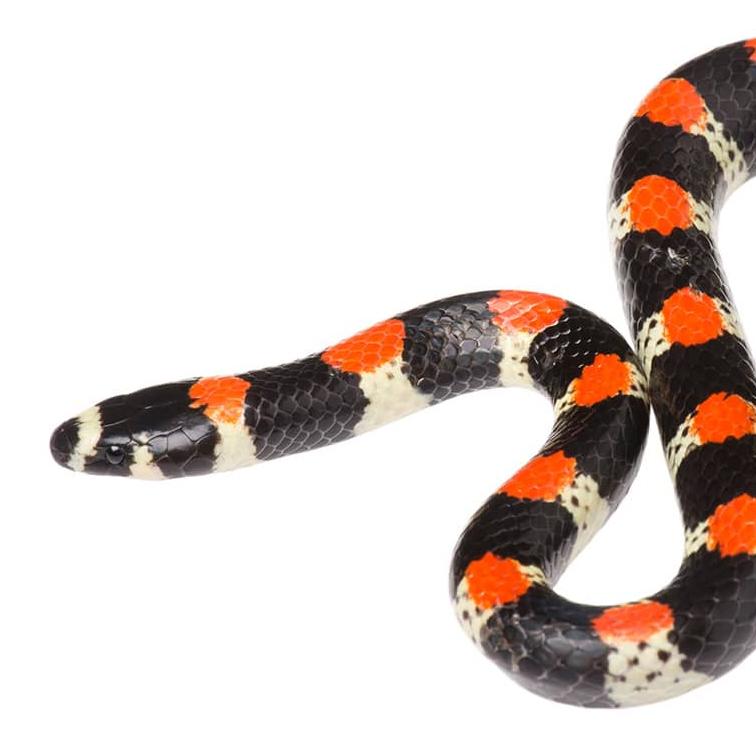 Because specimens collected in the 19th century were generally not preserved with formalin they are suitable for techniques such as DNA sequencing. In many cases these specimens represent localities that no longer exist, making them valuable for the study of systematic, phylogenetic, population, and biogeographical patterns. Of particular note is a series of Cnemidophorus lizards collected in 1868 in Florida: this genus is thought to speciate rapidly through chromosomal change and parthenogenesis and the series is thus of historical importance to evolutionary biologists.

The collection also includes large series of skinks from Egypt and amphibian and reptile taxa from Cameroon, Pakistan, and other areas that are now difficult to access for field research.

The Division of Vertebrate Zoology herpetology holdings contain amphibian larvae from many taxa and geographic areas, spanning approximately a century. These specimens are typically catalogued as lots, with many individuals in a single catalogued unit. The collection consists of 1,460 specimen lots (over 9,000 individual larvae) representing at least 46 taxa from at least 15 countries. 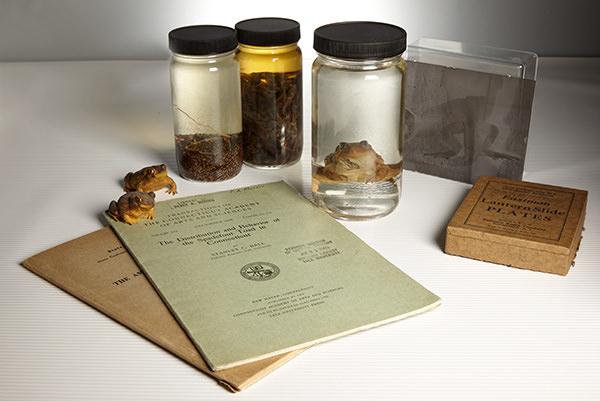 The collection includes an impressive 657 lots of the Eastern Spadefoot Toad tadpole (Scaphiopus holbrookii)—well over 5,000 individuals—collected in the 1930s from a few sites in Connecticut by Stanley C. Ball. This species is nearly extinct in Connecticut. Even at that time Ball was aware of its decline. In his letters and notes, Ball often lamented that this species might not survive. He worked hard to understand the animal and to teach appreciation for it.

Many of Ball’s study sites did not retain water long enough for tadpoles to complete metamorphosis. Even more of these ponds were drained or filled by municipal organizations within 3 years of his studies. Today all of Ball’s original sites have been lost to development. Only the specimens he collected remain as proof that this amazing species once lived there.

The herpetology collection in the Division of Vertebrate Zoology houses 119 type specimens in 10 taxa. Six taxa are from Haiti, the result of a joint expedition to that island in the 1950s by the Yale Peabody Museum and the Florida Museum of Natural History. There are 2 from Papua New Guinea and the last from Bolivia. The type specimen collection has grown with new species added from expeditions by Peabody herpetologists. 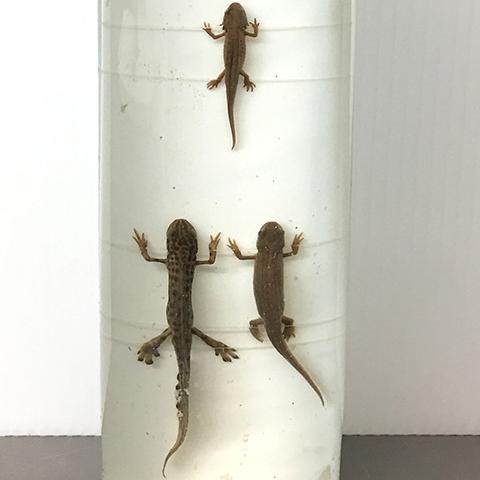 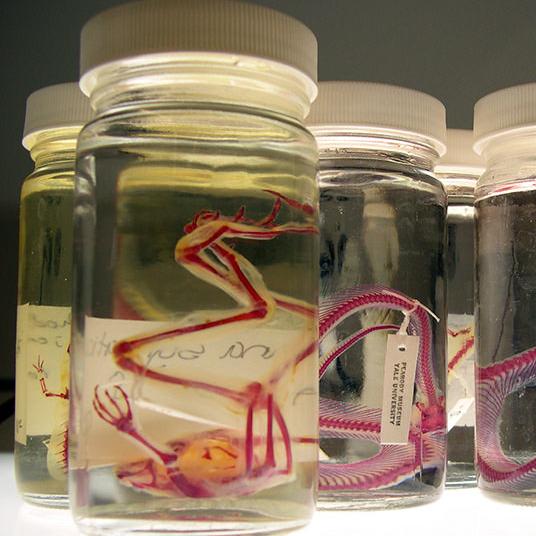 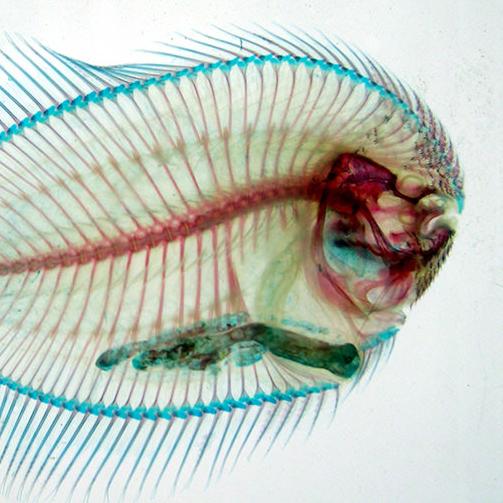 The Division of Vertebrate Zoology herpetology collections holds over 22,000 wet specimens. The term “wet” in wet collections is literally true. These specimens are stored in fluids. Which kind of fluid depends on the developmental stage of the animal and the desired use of the specimen. Such specimens are useful to several different types of research.

The herpetology fluid collection has been used in studies of feeding ecology, reproductive biology, developmental biology, and parasitology. Specimens are also used for studies in conservation genetics and systematics.

Amphibian larvae are kept in 10% buffered formalin. Other specimens are maintained in 70% ethanol. The main reason for storing larvae in formalin is that ethanol tends to dehydrate specimens, resulting in a reduction in their usefulness to researchers.

Another valuable wet preparation method, used especially to study the developmental biology of a species, is clearing and staining, a process whereby a specimen is made transparent and the bones and cartilage are stained different colors. 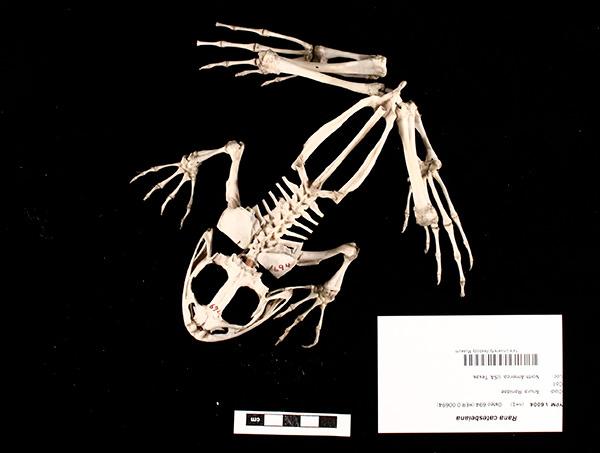 The skeletal collections at the Yale Peabody Museum were initially created in the 19th century by Othniel C. Marsh for use as comparative material for his paleontological studies. The skeletal collections for all modern vertebrates were at first united into a single Osteology Division. All skeletal specimens are now maintained within the Division of Vertebrate Zoology.

The herpetology skeletal collection is constantly growing and contains over 2,500 amphibians and reptiles. Some are fully articulated and mounted for use in education and for occasional exhibition. Most specimens, however, are semi-articulated and used by researchers studying topics ranging from pathology to systematics.

The Division has been preparing fully disarticulated specimens. These are especially useful for archaeological research and for studying fossil amphibians and reptiles, because field studies in these areas often obtain only small skeletal fragments.

Herpetofauna of the Americas, Africa & Asia

The Division of Vertebrate Zoology collections contain amphibians and reptiles from throughout Mexico, Central America, and the islands of the Caribbean. It has renewed its interest in this region with fieldwork in Costa Rica and El Salvador, especially on salamanders.

See “Notes on a Collection of Amphibians and Reptiles from El Salvador,” by T.A.A.M. Leenders and G.J. Watkins-Colwell, Postilla 231, 2004. 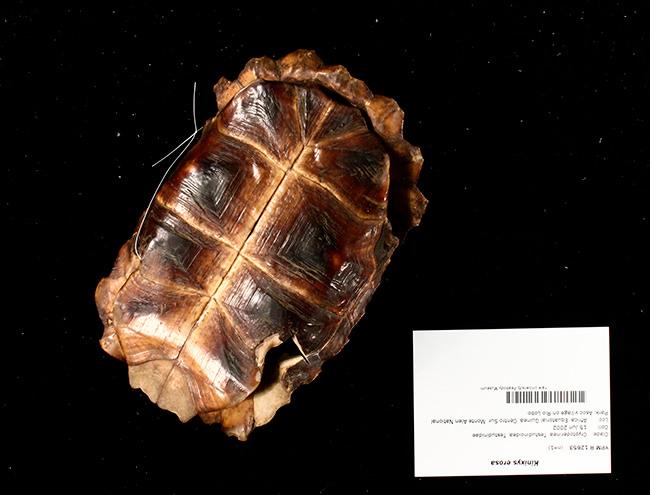 The herpetology collection is rich in amphibian and reptile specimens from western Africa, specifically Benin and Cameroon. This region is diverse in its topography and thus also in habitat types.

In 2002 the Peabody began work in Equatorial Guinea, which shares a border with Cameroon. Although the islands of Equatorial Guinea have been studied, the herpetology of the mainland (Rio Muni) is largely unknown. The topology and climate of Rio Muni contributes to a great diversity of species for this small country. More than 53 specimens representing over 400 taxa of amphibians and reptiles have been collected there. 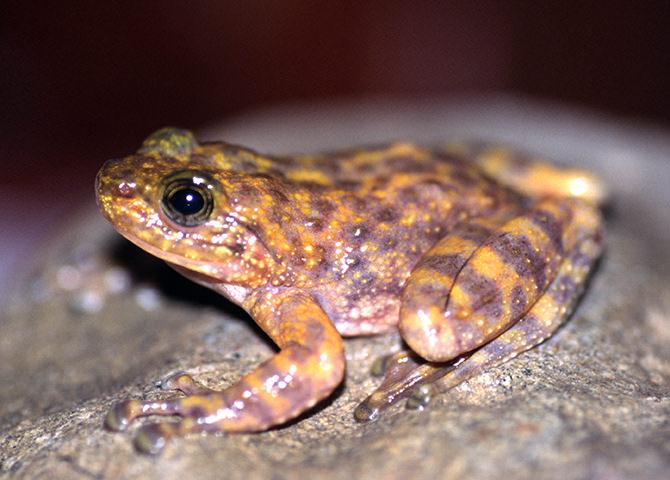 Holdings in the herpetology collection of the Division of Vertebrate Zoology includes specimens from throughout Asia.

Fieldwork by affiliates and staff on the islands of the Taiwan Strait, in Guangdong Province, and in the less populated areas of Hong Kong has collected more than 800 specimens representing more than 65 taxa. Although new species have been discovered, this fieldwork has revealed changes to geographic distributions of known species. Species thought to be restricted to mountains are also found on offshore islands. This could mean that when sea levels rose some species were isolated on what are now the islands of the Taiwan Strait. Those populations held on while the mainland populations largely succumbed to habitat alteration and other human activities. This resulted in refuge populations both in the isolated mountains of the mainland and the offshore islands. 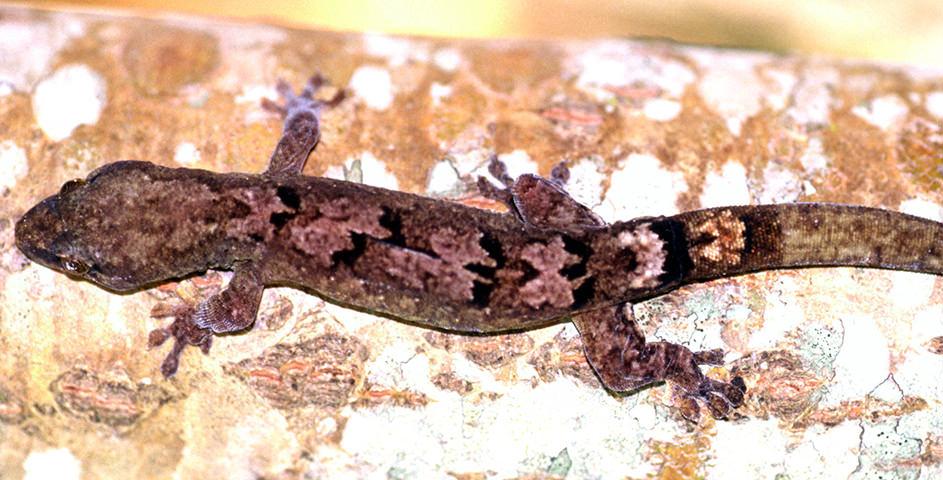 New Caledonia, an archipelago in Melanesia off the eastern coast of Australia in the southern tropics, consists of the main island Grande Terre, the 3 Loyalty Islands, the Isle of Pine, and hundreds of smaller islands. Habitats on Grande Terre include mangrove swamps, grasslands, lowland shrub forests, mountain damp forests, mountain dry forests, and even moss forests. Because the organisms there have been isolated from other major land masses for at least 65 million years, most—plants, invertebrates (including insects), bats, birds, and lizards—are unique to the region. Many of these species are members of groups known otherwise only from fossils.

Expeditions to New Caledonia, Grande Terre, and some of the smaller islands have discovered at least 2 new genera of lizard and as many as 20 new species.

Research in the Herpetology Collections