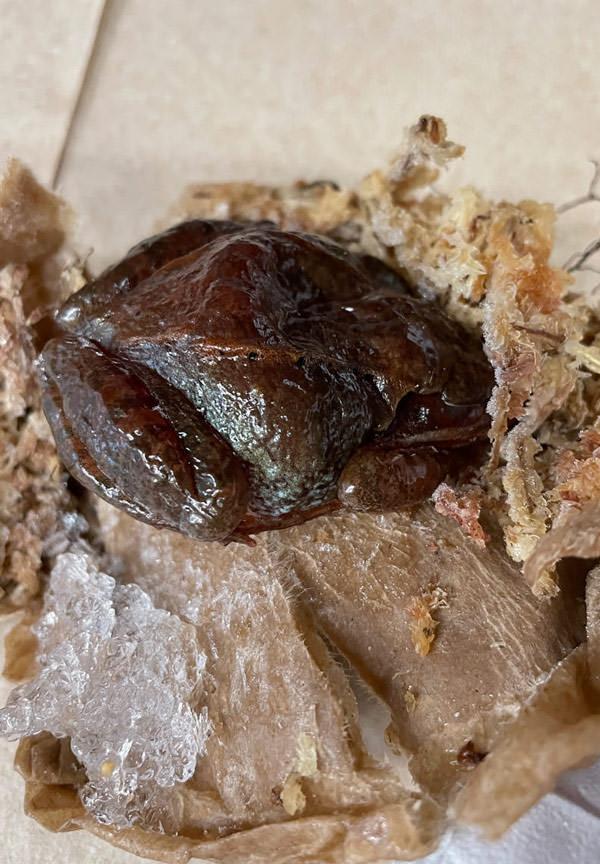 In winter, Wood Frogs dig into leaf litter and freeze, only to thaw out in spring. Even the lenses of the eyes freeze.

In late winter, an amazing transformation takes place. Wood Frogs (Rana sylvatica)—now motionless in woodlands from New England and the Appalachians to Canada and Alaska, and frozen in the leaf litter—will thaw and come back to life.

The frogs have been there since last fall. When cold weather arrives, special nucleating proteins cause water in the blood to freeze. This causes the water to be sucked out of the frog’s cells, while at the same time sugar (glucose), urea, and glycerol, which act like anti-freeze, are pumped into the cells. The frog’s heart stops beating and its body functions shut down, a unique adaptation that enables the Wood Frog to survive frigid temperatures in its North American range as far north as the Arctic Circle and above (see my April 6, 2020, post “What’s That Quacking in the Woods?” in the Beyond Your Back Door blog).

But with wide temperature swings, how will these frozen frogs fare? Can Wood Frogs adapt to climate change? How will the species do with the predicted increase in freeze–thaw cycles? That’s what doctoral candidate and herpetologist Yara Alshwairikh in the Yale School of the Environment is asking with her research. As Alshwairikh explains in this video of her presentation for the Peabody’s 26th Annual Celebration of Dr. Martin Luther King’s Legacy of Social and Environmental Justice, Wood Frogs have different tolerances for withstanding freezing depending on where they live. 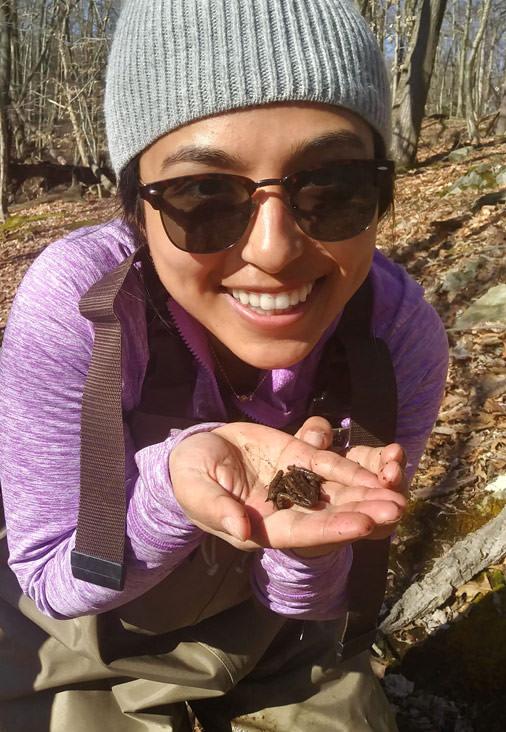 In different climate zones the frogs are influenced by minimum temperatures. “In the Arctic, where rapid warming is more pronounced than in middle temperate zones, wide temperature swings with more freeze–thaw cycles might be costly for an animal,” according to Alshwairikh. Wood Frogs in Fairbanks, Alaska, stay frozen for 6 months in temperatures as low as –18.1 °C (0.4 °F). In the southern part of their range, like Ohio, Wood Frogs can withstand temperatures of –2 to –3 °C (28.4 to 37.4 °F). But in Georgia and Alabama, they might not freeze at all.

After the last ice age, when the North American Laurentide Ice Sheet receded about 11,500 years ago, Wood Frog populations gradually moved back north. “If we can understand that historical movement and the abilities of Wood Frogs to adapt, we might better be able to understand how the frogs might be able to adapt to our changing climate,” Alshwairikh says.

Not only do natural history museums like the Yale Peabody Museum provide a library of specimens from the past, but they hold a vital storehouse of genetic material key to research, which could help save species in the future. For her research Alshwairikh extracts DNA from frog liver and muscle tissue samples from different populations. “One way to answer questions on climate adaptation is to examine genetic variations in Wood Frog populations in different localities across their range,” she explains. This includes traveling to the northern edge of the species’ range with colleague Andis Arietta and other researchers to collect frogs along the Kobuk River in Northwest Arctic Borough, Alaska, above the Arctic Circle. 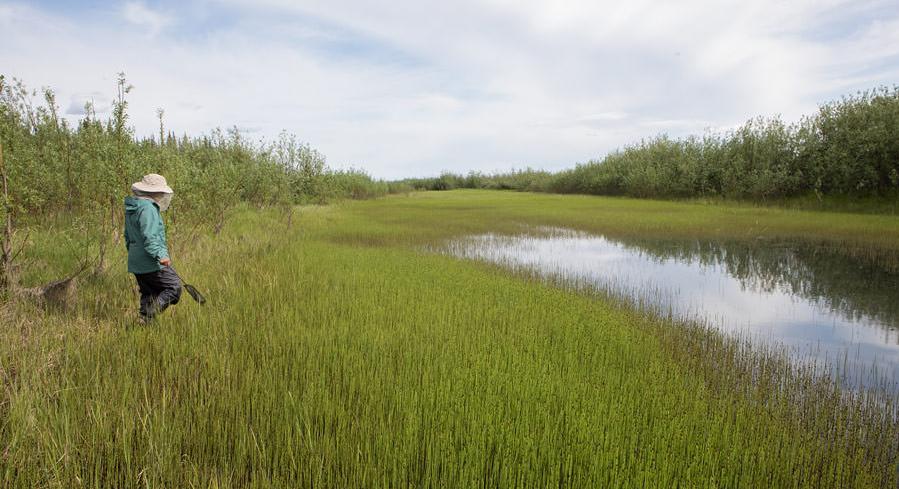 Alshwairikh hunts for Wood Frogs above the Arctic Circle in Alaska. Notice the headgear with mosquito netting. Battling swarms of mosquitos when doing fieldwork can be tough.

But to collect samples from across the Wood Frog’s entire range would take years. Instead, Alshwairikh uses the Yale Peabody Museum’s significant collection of tissue samples from many locations. She was also able to gather samples from museums across the United States and Canada, as well as from fellow researchers. These samples are sent to a DNA sequencing facility. 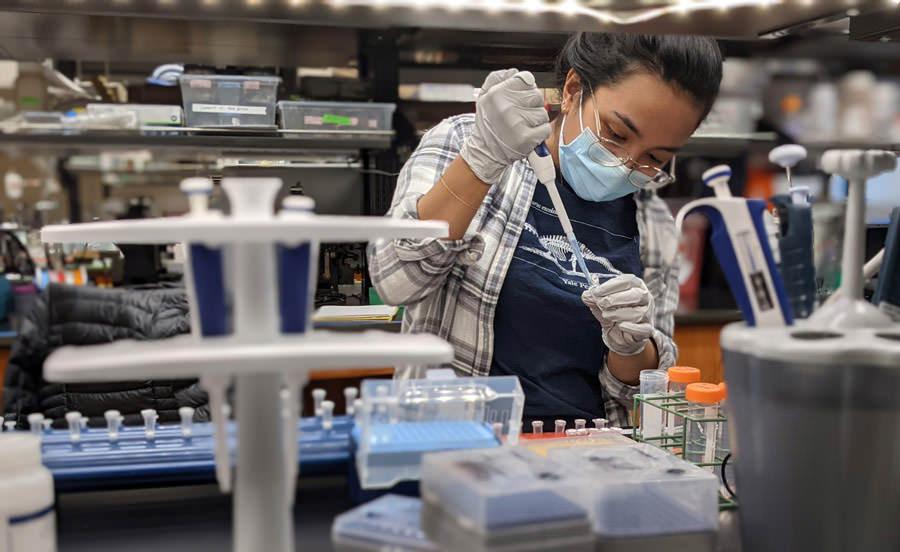 Much of biological research takes place in the lab. Here Alshwairikh extracts Wood Frog DNA to be sent off for sequencing.

“Sequencing is a tool that gives us information about the DNA composition of each frog—their genetic code. Basically, the sequencing data is made up of huge text files that detail the specific genetic code of each frog sample, which is a collection of nucleotides (building blocks) of DNA called adenine (A), cytosine (C), guanine (G), and thymine (T),” says Alshwairikh. “We know that there is variation in the DNA of Wood Frogs. For example, at a specific position of the Wood Frog genome, some frogs might have an adenine (A), and some might have a cytosine (C). We look for signals of environmental adaptation by looking for associations between an environmental variable (like precipitation) and specific and consistent variations in the genetic code across all the samples.” 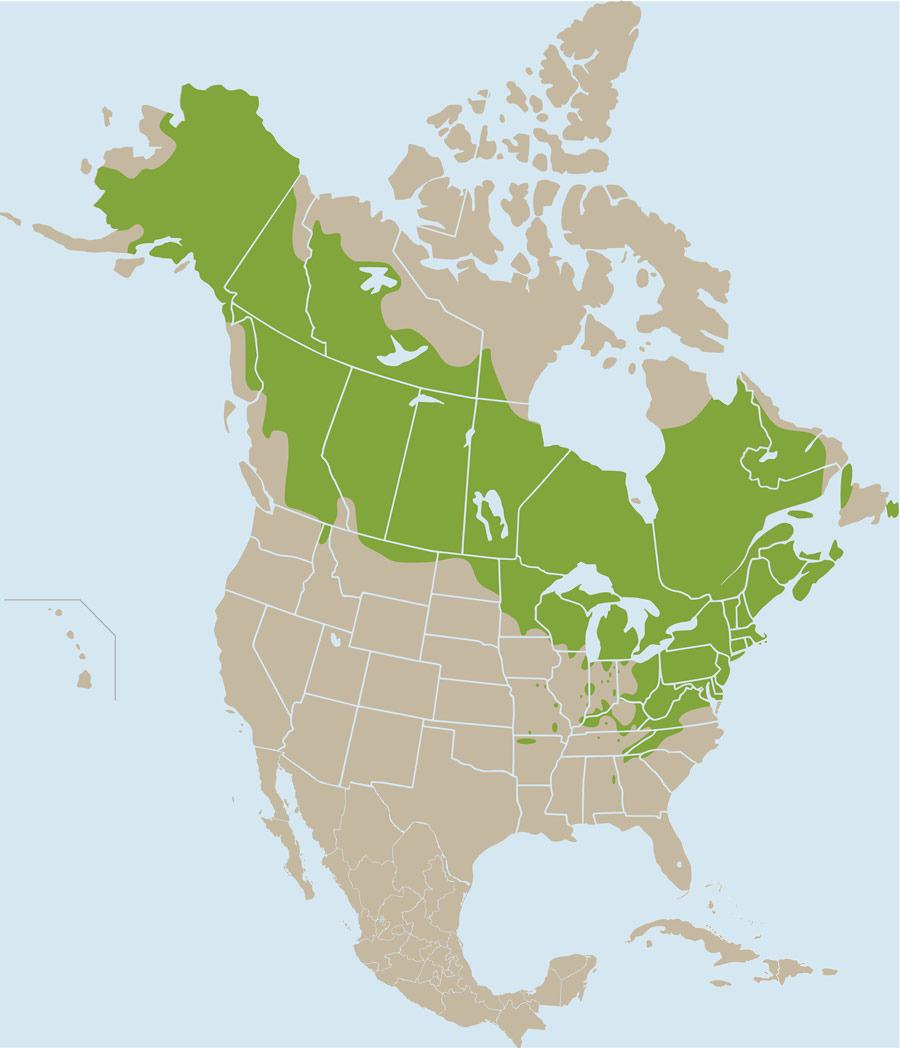 Alshwairikh compares the results to look for any signals that relate how the Wood Frogs adapt to changes in temperature, rainfall, and snowpack. This important data will be available for researchers far into the future. Alshwairikh’s research will help scientists learn how well Wood Frogs will survive climate change and how they might be better protected.

Here in Connecticut, Wood Frogs gather in vernal pools to mate from February through March. Males arrive first and for a few weeks you can hear their duck-like quacking call to attract females. You can help researchers monitor when frogs start and stop calling in the spring, as well as their calling intensity (which indicates population size) through a national community science project called FrogWatch USA. Training workshops are offered every year by the Yale Peabody Museum’s FrogWatch chapter, in partnership with the Maritime Aquarium at Norwalk and Connecticut’s Beardsley Zoo.