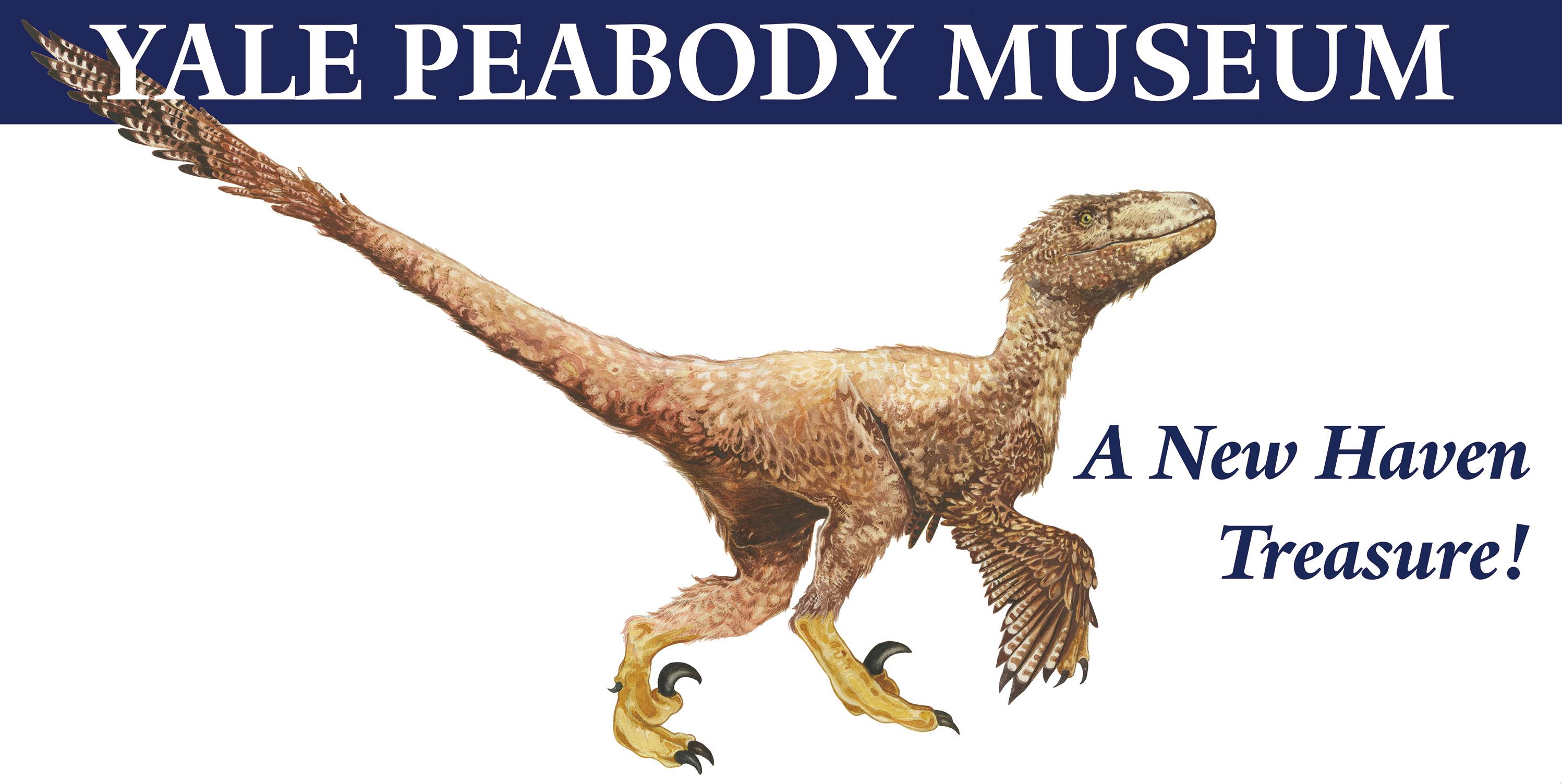 In 2016, I worked on an exciting project for the Yale Peabody Museum of Natural History, to bring the Museum’s famous Deinonychus skeleton to life, feathers and all. This new art would replace the detail of Rudolph Zallinger’s The Age of Reptiles mural that had been on display for 17 years on an oil tank along I-95 in New Haven, Connecticut, but was removed in 2014 when the tank required maintenance. To ensure that this depiction was as accurate as possible and considered the latest discoveries—most importantly, that we now know many dinosaurs were covered in feathers—I was guided by vertebrate paleontologist and the Peabody’s then Director of Public Programs Richard Kissel. 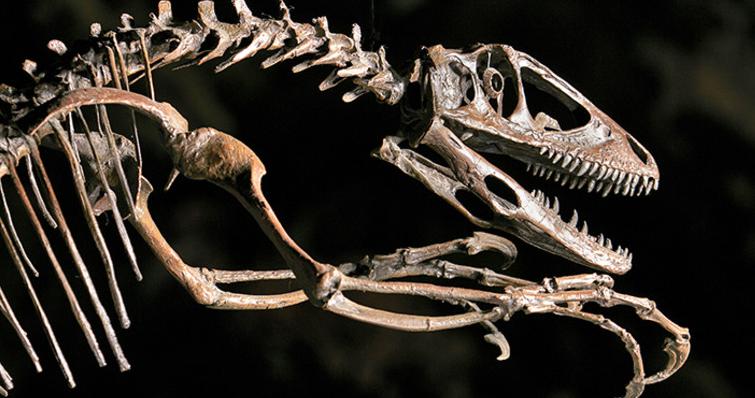 Discovered and named by Yale paleontologist John Ostrom in 1969, Deinonychus re-ignited the connection between dinosaurs and birds. Ostrom’s study of its anatomy also led to the dinosaur renaissance, the movement that popularized dinosaurs in our films and culture, spurring new generations of dinosaur enthusiasts. The Yale Peabody Museum had on display at the time two versions of Deinonychus, one a skeleton in a jumping pose, and the other a standing life-like model, both that reflected this early research. But recent discoveries of similar fossil raptors have feathers, so Deinonychus was no doubt also covered in feathers. These would have been both shorter along the body and longer on the limbs and tail. 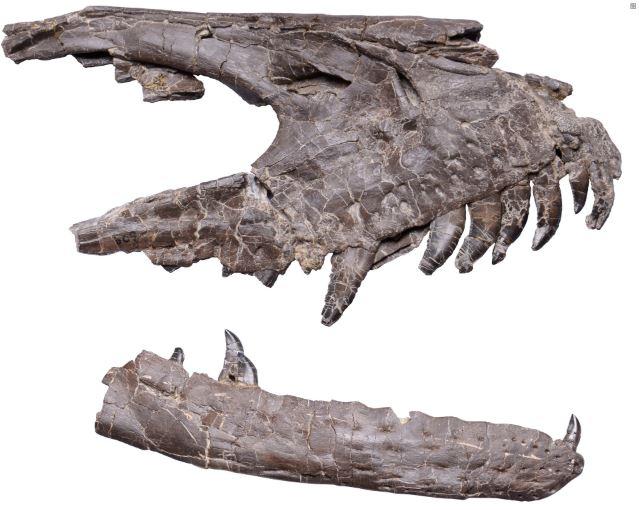 After studying these skeletal articulations, I began several sketches to explore poses. 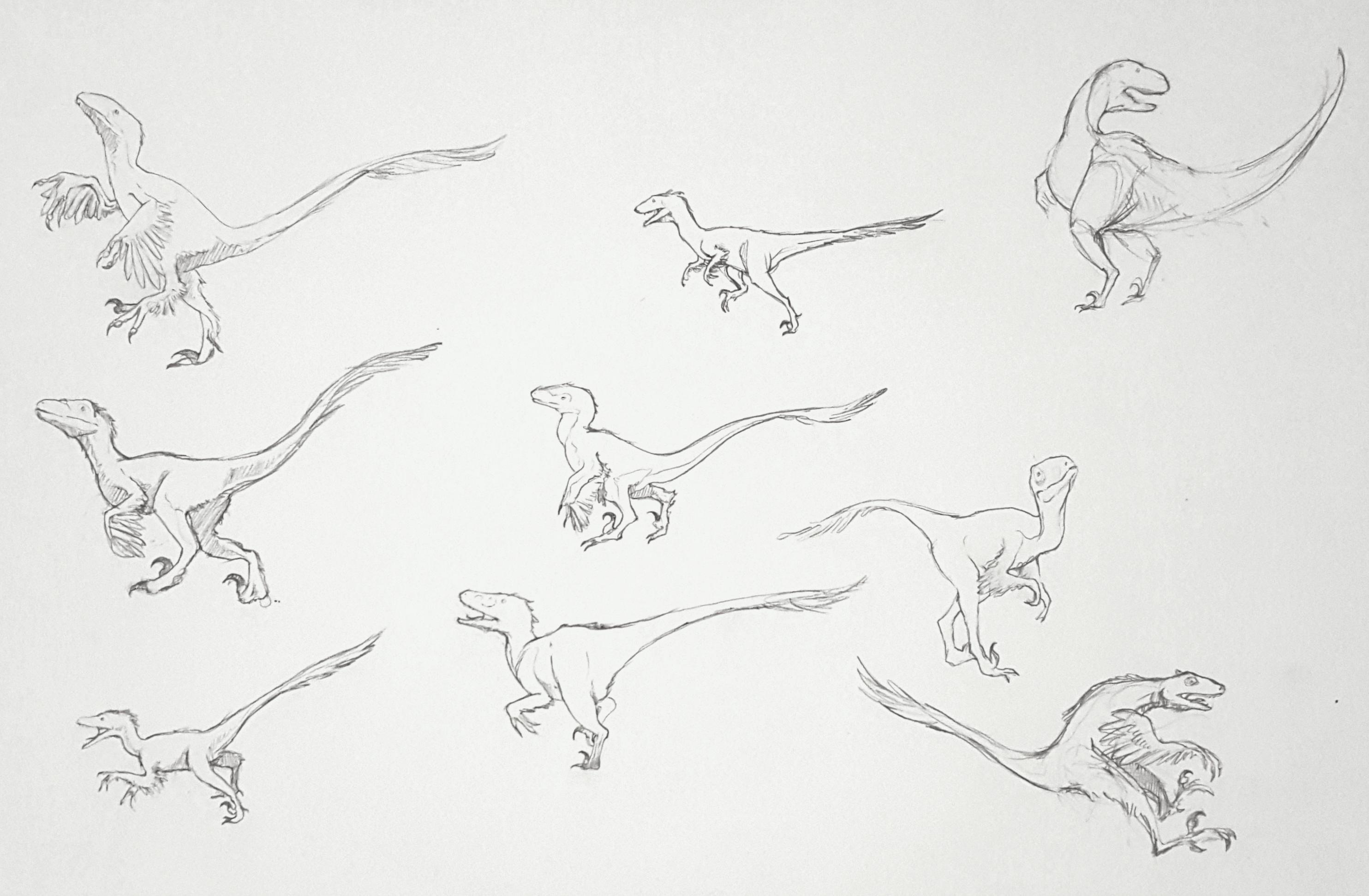 The Peabody selected the preferred pose and I created a more detailed drawing. 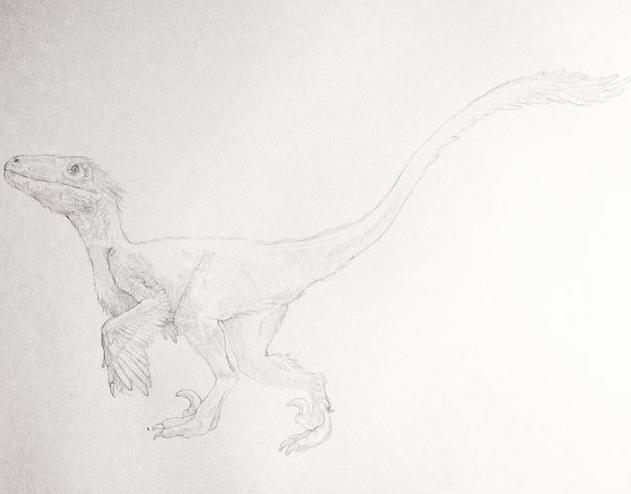 The Museum staff reviewed this more refined drawing, and made additional comments, digitally drawing and making notations on the image I had sent. 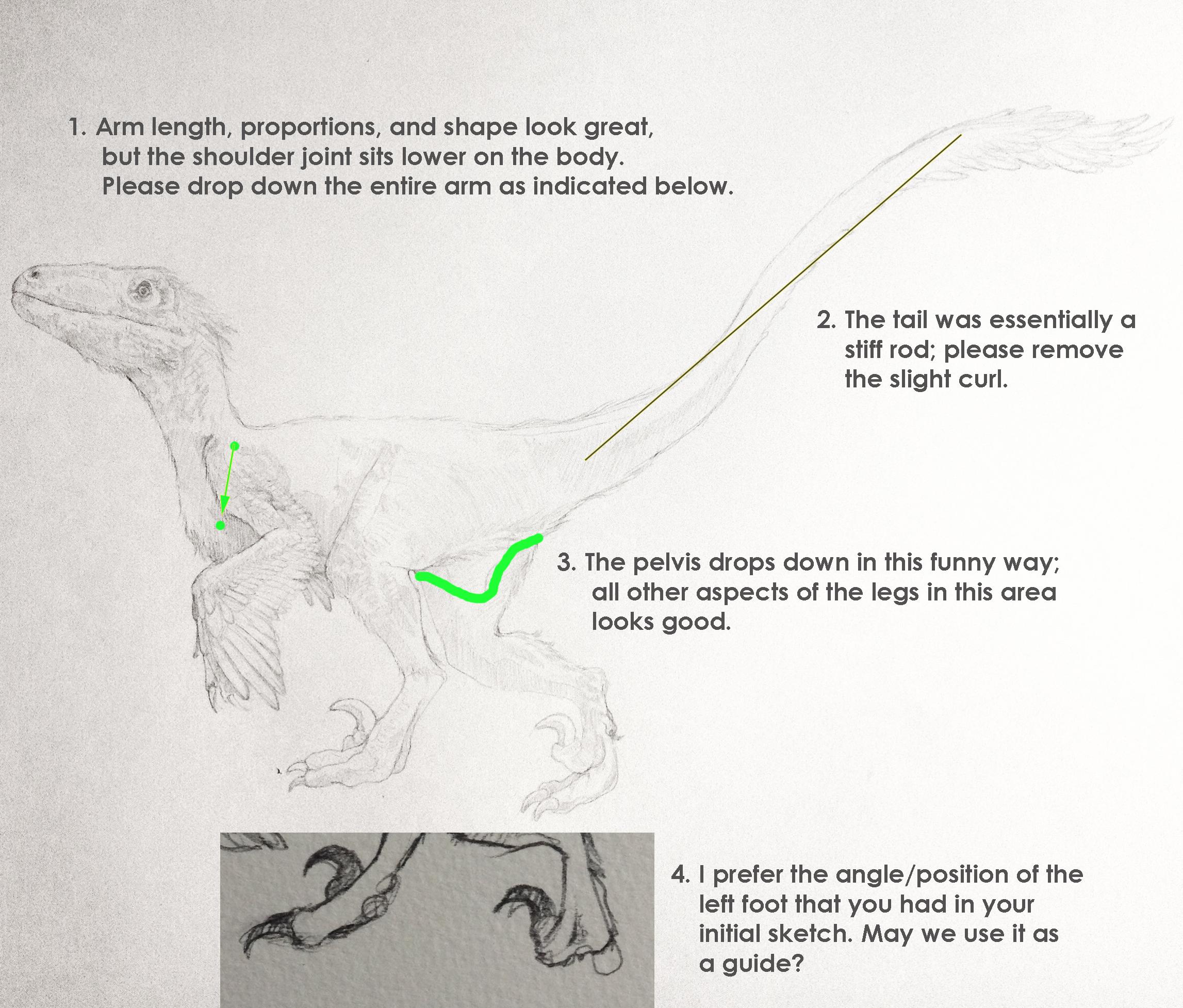 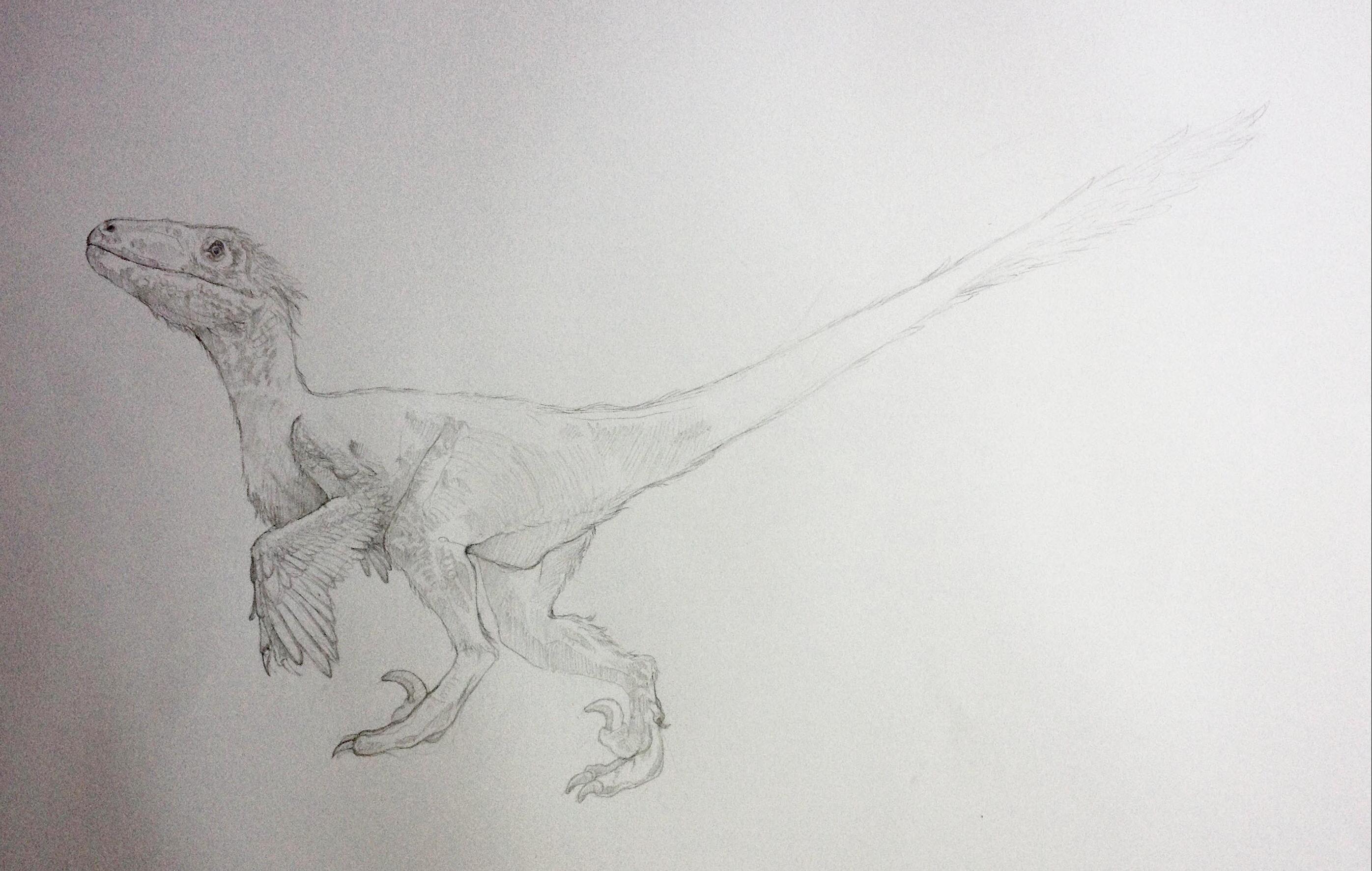 …and then more adjustments. I brought the pelvis down lower, and dropped the arm down and forward. 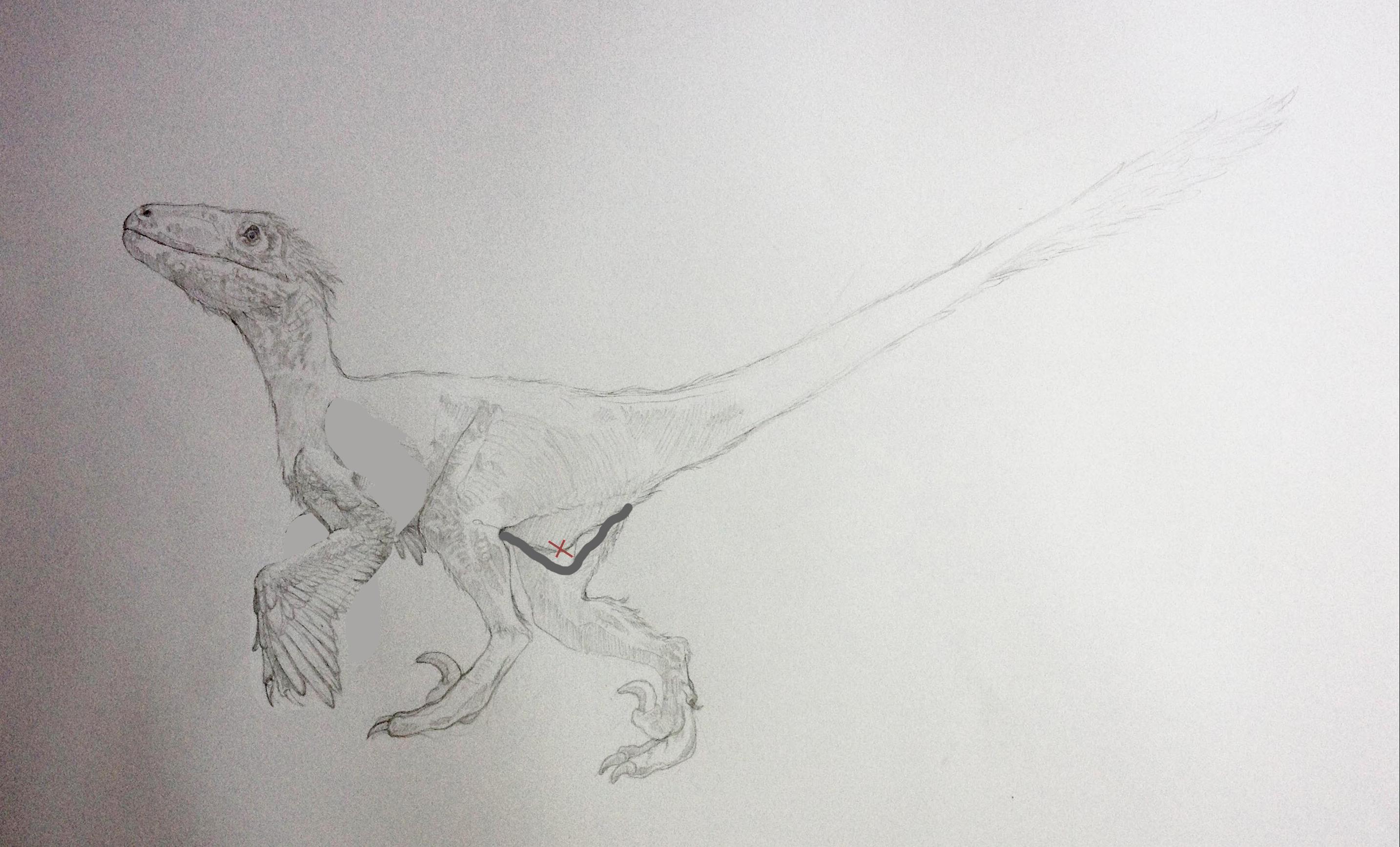 With the final sketch approved, we moved on to discuss color. 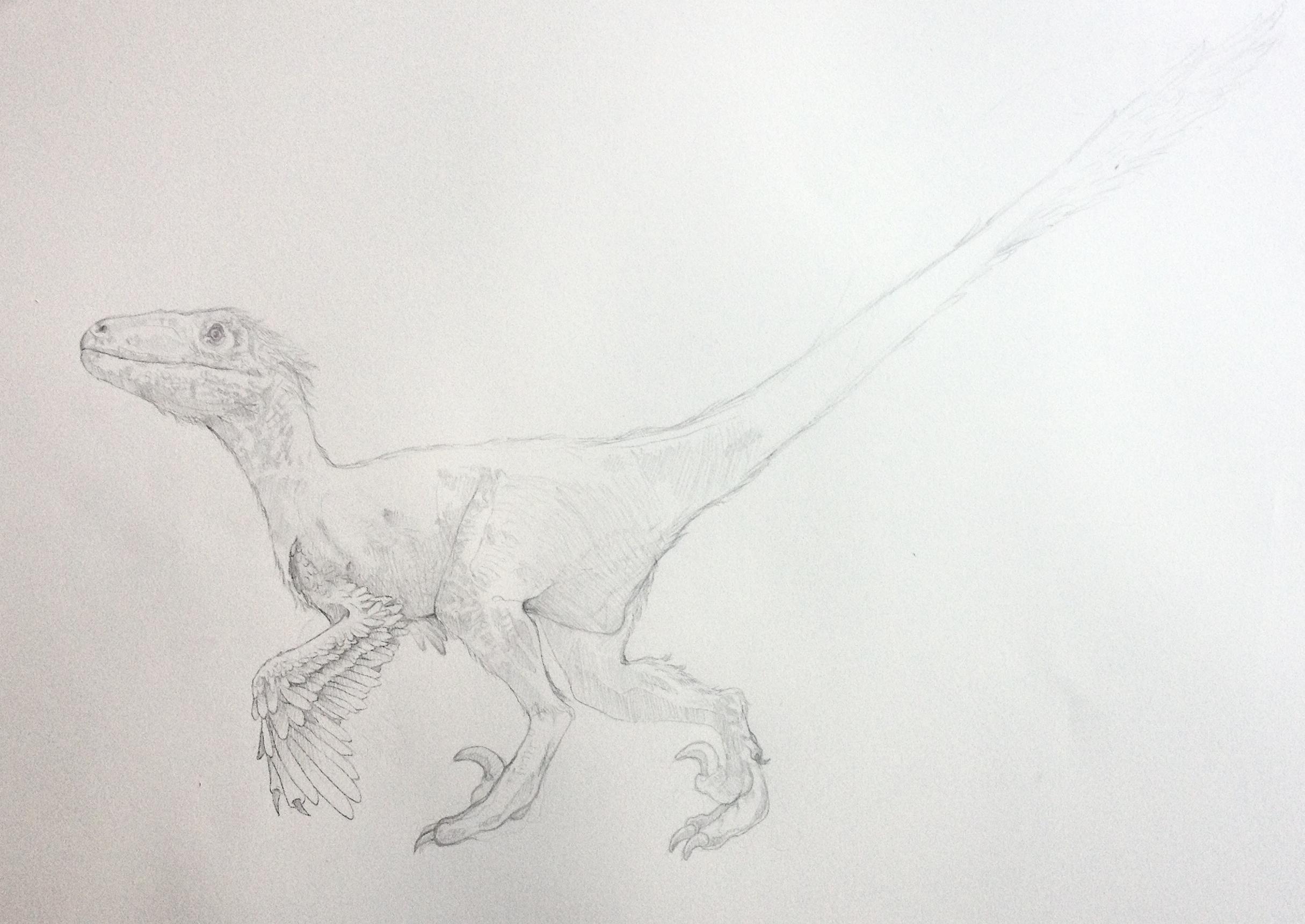 Coloration is typically tied to the environment. After learning that Deinonychus may have lived in swampy areas, I researched living raptors from places like Louisiana. We agreed to imitate the coloring of the Cooper’s Hawk and the Red-shouldered Hawk, which have neutral, reddish brown bodies, and lighter colors and bar patterns on the wings and tail. 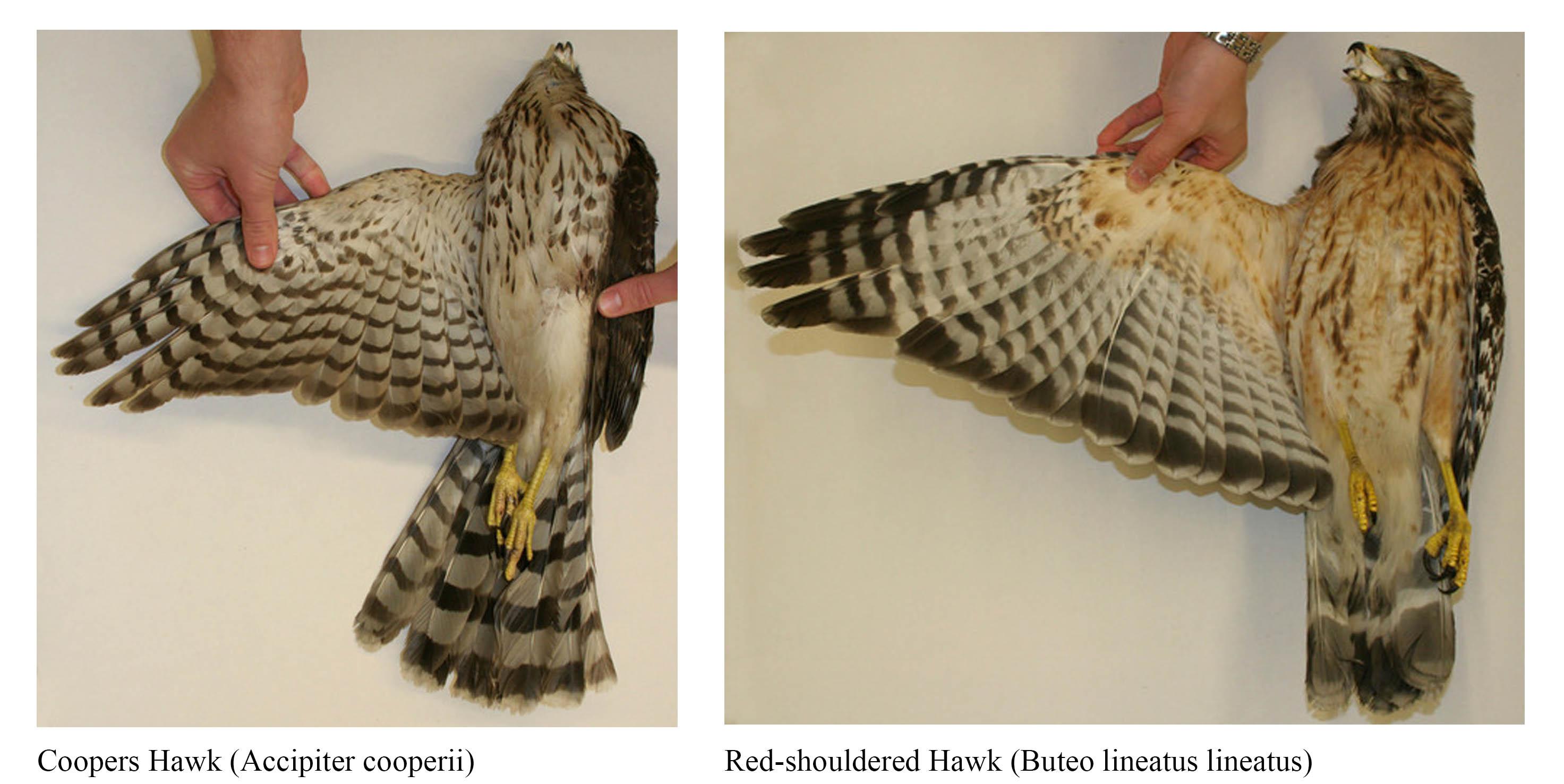 I painted using a palette of reddish browns and ochres. 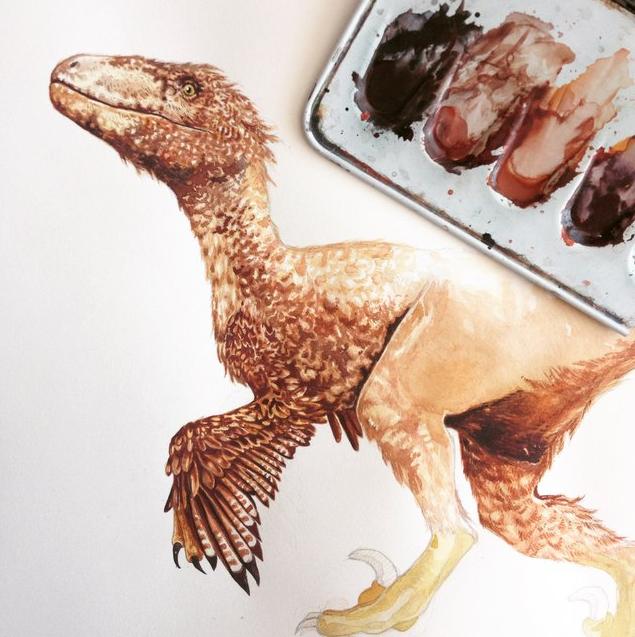 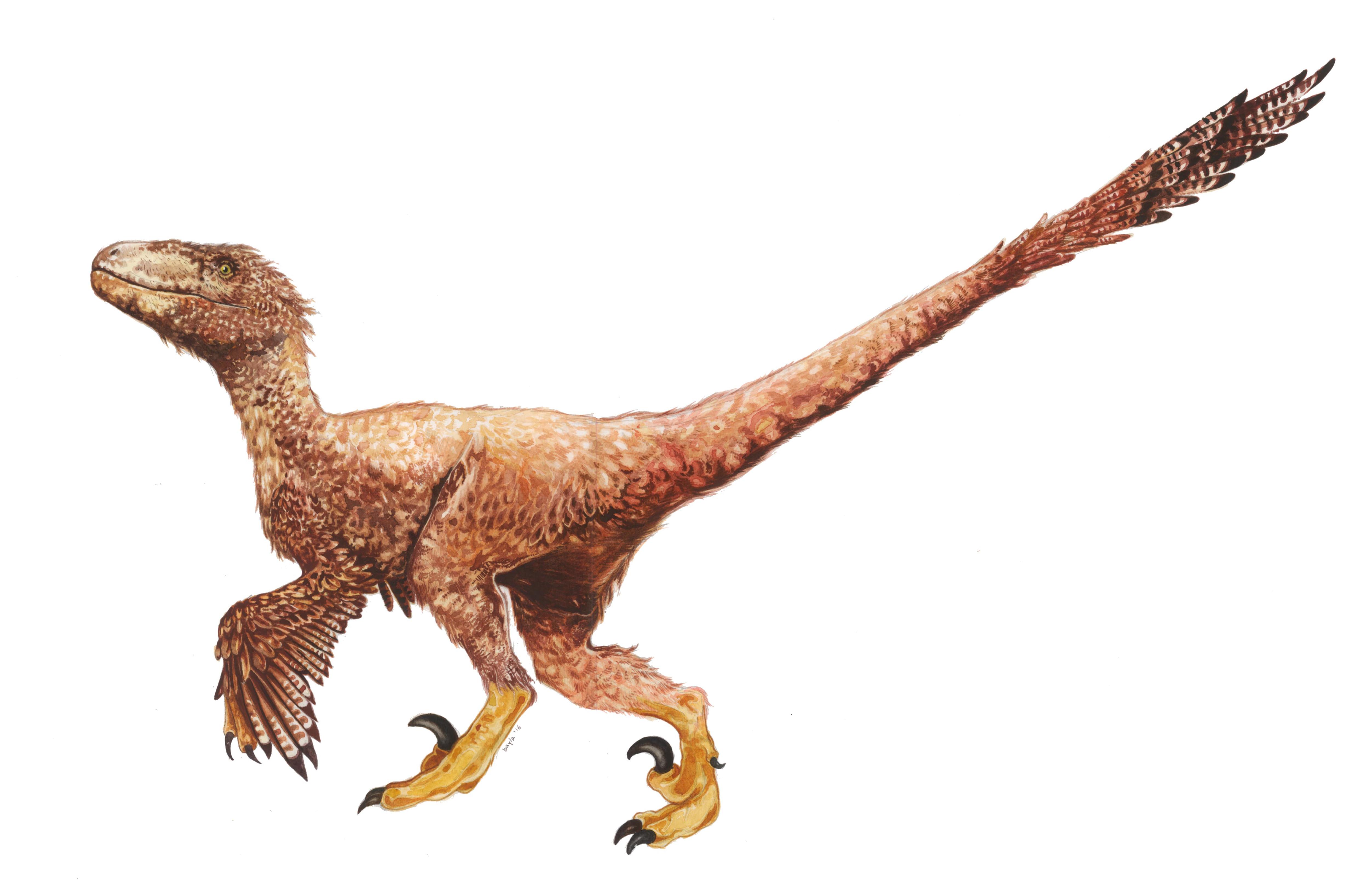 This finished painting was scanned at high resolution so that it could be enlarged to 72 feet by 36 feet, the size needed for display on the oil tank. The new art, which went up in 2016, is expected to last about two decades! 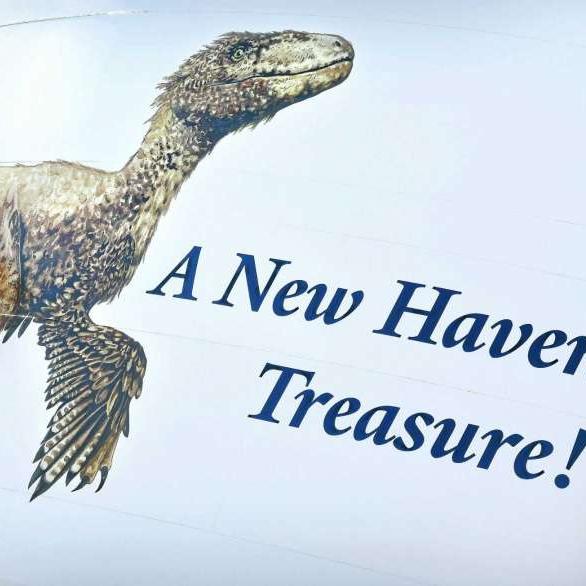 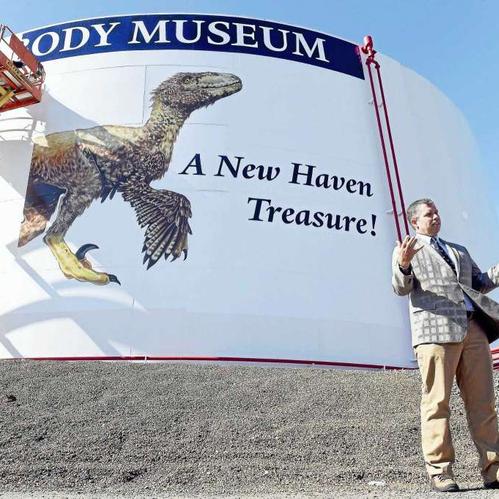 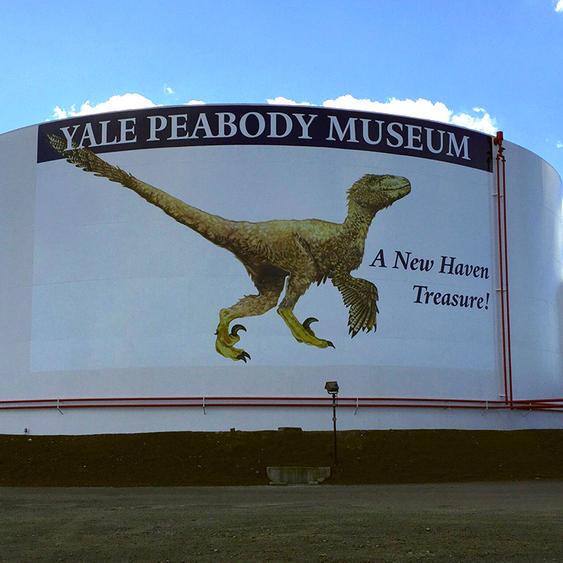 This project was a wonderful opportunity to collaborate with the Yale Peabody Museum and to learn more about dinosaurs. Communication and bird specimens in the Museum’s ornithology collection were paramount in creating the image that now welcomes visitors to New Haven. 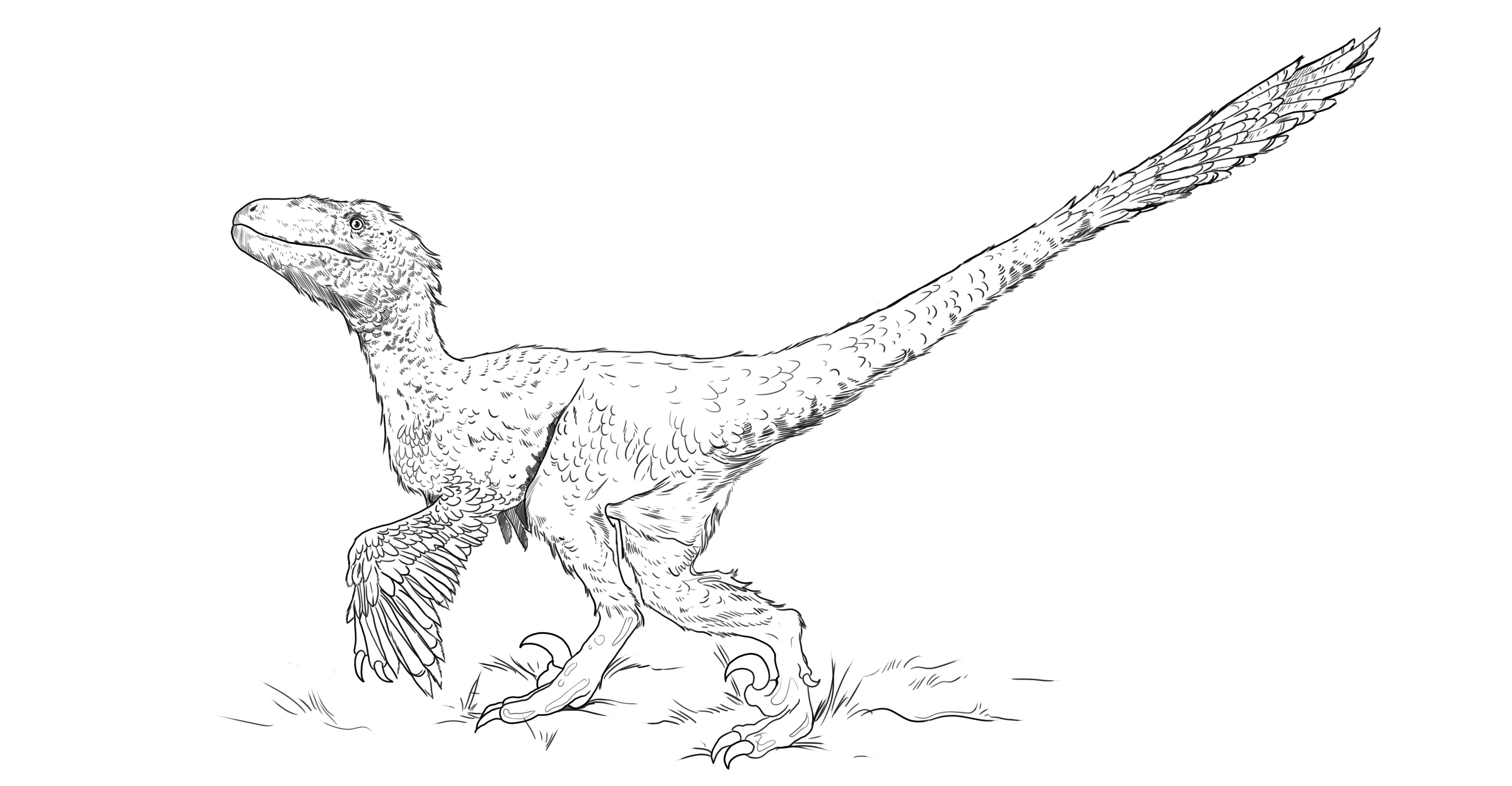